What is the meaning of Life?
​ 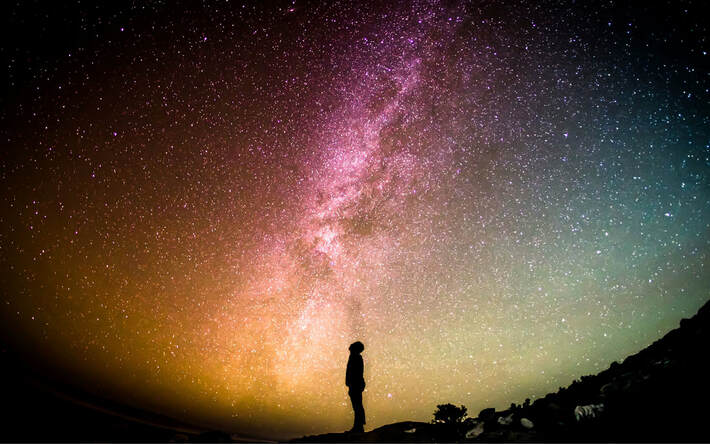 Have you ever looked up into the sky and wondered, "What is the purpose of life?, Why are we all here? What is it all about?"

As Above, So Below

Matthew 6:10
Thy kingdom come. Thy will be done in earth, as it is in heaven.

Do You Believe in a Universal Intelligence?
​
Psalm 14:1
The fool hath said in his heart, There is no God. They are corrupt, they have done abominable works, there is none that doeth good.
​

Psalm 14:1
The fool hath said in his heart, There is no God. They are corrupt, they have done abominable works, there is none that doeth good.

1 Corinthians 1:21
For after that in the wisdom of God the world by wisdom knew not God, it pleased God by the foolishness of preaching to save them that believe.​
​ 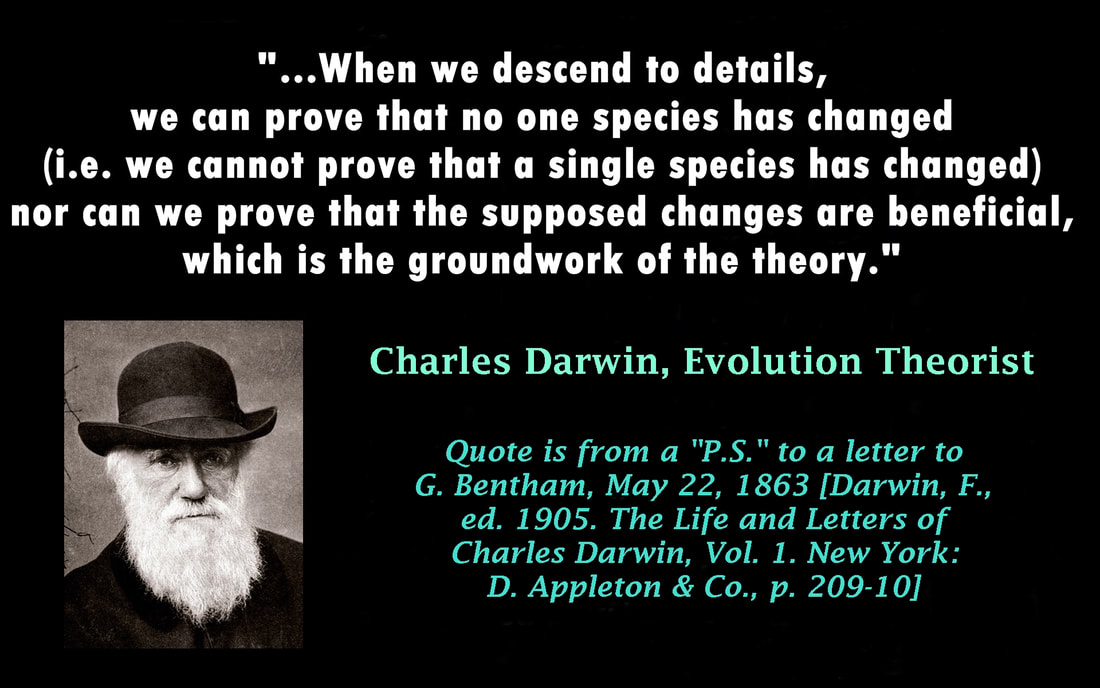 ​One of the accepted mainstream scientific theories at the time, which is believed to have influenced Darwin's work, was the Theory of Spontaneous Generation.  The Theory of Spontaneous Generation (redefined in Modern Era as Abiogenesis) was "coherently synthesized" by the philosopher and scientist Aristotle in the 300's B.C. It is the hypothetical process by which living organisms developed from non-living matter and was utilized to explain the origin of life.  The Theory of Spontaneous Generation was the prevailing scientific belief addressing the origin of life and lasted from about 300 B.C. til the 1800's, over 2000 years, until it was disproved in the late 1800's by the experiments of Louis Pasteur and others.  It is good to keep in mind the relatively primitive nature of "science" from the 300's B.C. til the 1800's. The "science" of Darwin's time was not even aware of the fundamental structure of a single cell, something which is considered common knowledge in today's science. Truly, Darwin's conclusions of his observations of nature for about 1 month in 1835 could more accurately be described as "Darwin's Theory of Natural Selection of the Galapagos Island Finch Bird Beaks".  Instead, his conclusions seem to have become "Darwin's Theory of the Origin and Common Ancestry through Evolution of ALL Life by Chance Random Mutations and Natural Selection". Darwinian Evolutionary theory is based on two principles: 1) Undirected Random Mutation (i.e. chance) and 2 ) Natural Selection.

One of World's Leading Synthetic Organic Chemists, James Tour: The Origin of Life
​Has NOT Been Explained
​

[﻿﻿Just a thought:﻿﻿  Even though Darwin's Theory of Evolution is widely accepted as "fact", just as the Theory of Spontaneous Generation had been, by mainstream scientists of the time, would it be prudent to base one's eternal existence upon the conclusions of a 22 year old amateur naturalist (who openly expressed serious doubts about his own theory) whose ideas are founded from his observations of nature for only about 1 month in 1835 and on the 300 B.C. Theory of Spontaneous Generation that has since been proven to be false by modern science? ... You decide.]​

​Daniel 1:4
Children in whom was no blemish, but well favored, and skillful in all wisdom, and cunning in knowledge, and understanding science, and such as had ability in them to stand in the king's palace, and whom they might teach the learning and the tongue of the Chaldeans.

1Timothy 6:20
O Timothy, keep that which is committed to thy trust, avoiding profane and vain babblings, and oppositions of science falsely so called: 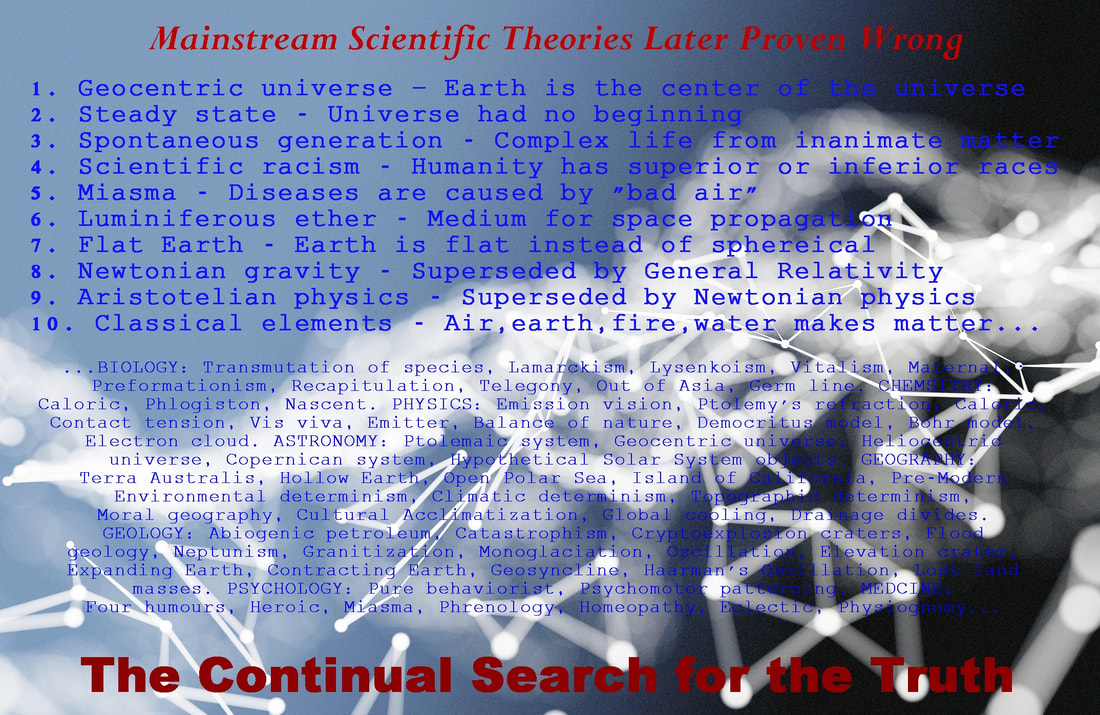 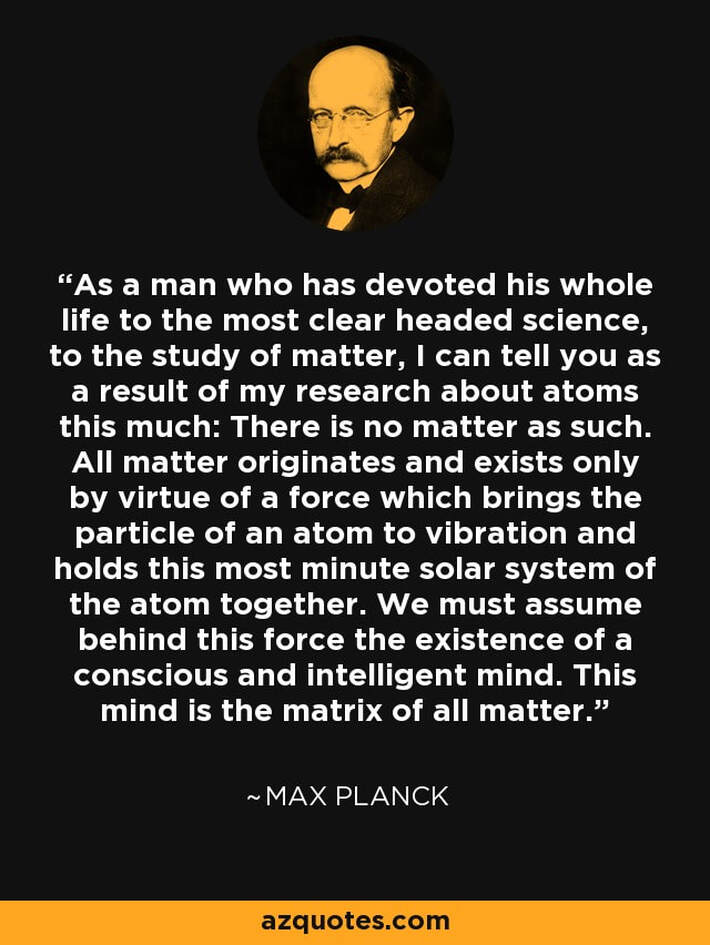 It is curious how Max Plank's (the Father of Quantum Physics) conclusions were so revolutionary in the field of science / physics (i.e. the immaterial (non-material) reality of nature and "the existence of a conscious and intelligent mind" as the ultimate force behind the fabric of reality). Yet, when microbiologists. biologists, geneticists, biochemists, other scientists, etc. come to the same conclusion (i.e. Intelligence/consciousness/mind is an integral and fundamental force behind the initial introduction and subsequent propagation of biological systems), they are rebuffed as being "unscientific".

"Matter cannot exist without physical laws and constants first existing. Physical laws and constants cannot exist without mind / consciousness / intelligence first existing. Mind / consciousness / intelligence is Prime.  Mind exists before Matter." --- Rod Dacanay
​
There are over 7.1 Billion people on earth. Of those 7.1 Billion people, it is estimated that almost 90% of them believe in a god.

There are over 2.1 Billion people on earth who profess to be Christian. (As a frame of reference, keep in mind that there are approx. 300 million people who live in the U.S.  So if you take every man, woman, and child living in the U.S. and multiply that number by 7, then that is the approximate number of professed Christians on earth.) 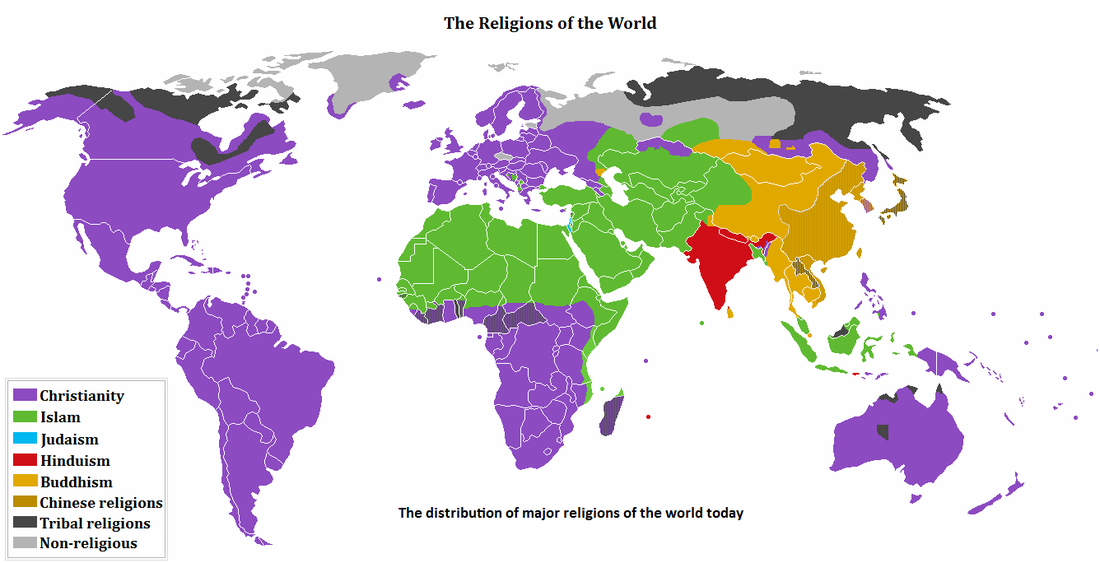 ﻿According to God, our whole purpose for existence is to ... fear Him and keep his commandments.﻿

Ecclesiastes 12:13
Let us hear the conclusion of the whole matter: Fear God, and keep his commandments: for this is the whole duty of man.

What does it mean to “Fear God”?

God's word teaches us that the “Fear of the Lord” is to “hate evil”.

Proverbs 8:13
The fear of the LORD is to hate evil: pride, and arrogancy, and the evil way, and the froward mouth, do I hate.

In essence, our whole purpose for existence is to hate evil, and keep God's word. 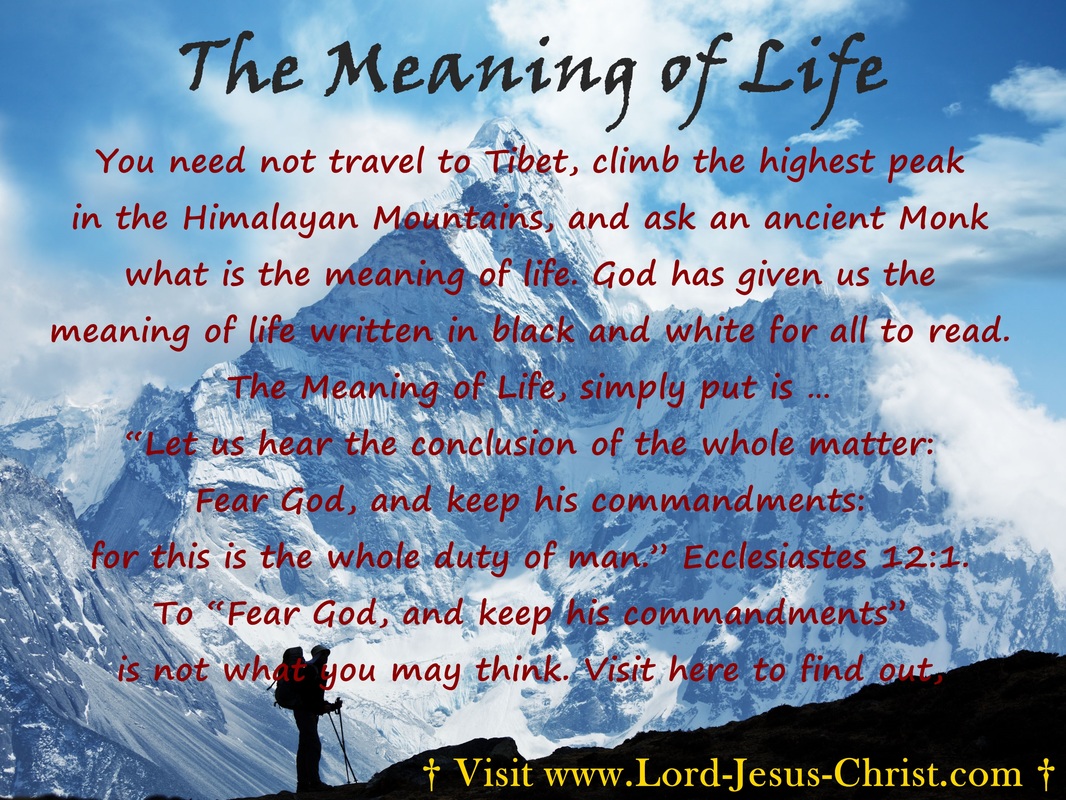 We may know the 10 commandments given to us by God through Moses.  But, what are all of God’s commandments?

Isaiah 29:13
Wherefore the Lord said, Forasmuch as this people draw near me with their mouth, and with their lips do honor me, but have removed their heart far from me, and their fear toward me is taught by the precept of men:

1John 2:15
Love not the world, neither the things that are in the world. If any man love the world, the love of the Father is not in him.

Luke 16:13
No servant can serve two masters: for either he will hate the one, and love the other; or else he will hold to the one, and despise the other. Ye cannot serve God and mammon.

1John 4:20
If a man say, I love God, and hateth his brother, he is a liar: for he that loveth not his brother whom he hath seen, how can he love God whom he hath not seen?

Mark 7:9
And he said unto them, Full well ye reject the commandment of God, that ye may keep your own tradition.

1John 3:18
My little children, let us not love in word, neither in tongue; but in deed and in truth.

Investigative Journalist, who is atheist,
​investigates God and converts after findings

John 14:23
Jesus answered and said unto him, If a man love me, he will keep my words: and my Father will love him, and we will come unto him, and make our abode with him.

2John 1:6
And this is love, that we walk after his commandments. This is the commandment, That, as ye have heard from the beginning, ye should walk in it.

1John 2:5
But whoso keepeth his word, in him verily is the love of God perfected: hereby know we that we are in him.

Top Atheist Scientist and Head of the Human Genome Project, Francis Collins,
​Converts to Christianity Because of Science
​

A person can do good works by hating evil, but if they aren't keeping God's word then they aren't fulfilling their duty to God.

Deuteronomy 5:29
O that there were such an heart in them, that they would fear me, and keep all my commandments always, that it might be well with them, and with their children for ever!

So, what happens after we hate evil and keep God's word? Are we all suppose to just be born, grow up, get a job, get married, have a family, retire, then die? Is that all there is to life?...

(Click the "Life after Death" Tab on the side of this page to learn more.)

1CORINTHIANS 13
1 Though I speak with the tongues of men and of angels, and have not charity, I am become as sounding brass, or a tinkling cymbal.
2 And though I have the gift of prophecy, and understand all mysteries, and all knowledge; and though I have all faith, so that I could remove mountains, and have not charity, I am nothing.
3 And though I bestow all my goods to feed the poor, and though I give my body to be burned, and have not charity, it profiteth me nothing.
4 Charity suffereth long, and is kind; charity envieth not; charity vaunteth not itself, is not puffed up,
5 Doth not behave itself unseemly, seeketh not her own, is not easily provoked, thinketh no evil;
6 Rejoiceth not in iniquity, but rejoiceth in the truth;
7 Beareth all things, believeth all things, hopeth all things, endureth all things.
8 Charity never faileth: but whether there be prophecies, they shall fail; whether there be tongues, they shall cease; whether there be knowledge, it shall vanish away.
9 For we know in part, and we prophesy in part.
10 But when that which is perfect is come, then that which is in part shall be done away.
11 When I was a child, I spake as a child, I understood as a child, I thought as a child: but when I became a man, I put away childish things.
12 For now we see through a glass, darkly; but then face to face: now I know in part; but then shall I know even as also I am known.
13 And now abideth faith, hope, charity, these three; but the greatest of these is charity.

JOHN 1
1 In the beginning was the Word, and the Word was with God, and the Word was God.
2 The same was in the beginning with God.
3 All things were made by him; and without him was not any thing made that was made.
4 In him was life; and the life was the light of men.
5 And the light shineth in darkness; and the darkness comprehended it not.
6 There was a man sent from God, whose name was John.
7 The same came for a witness, to bear witness of the Light, that all men through him might believe.
8 He was not that Light, but was sent to bear witness of that Light.
9 That was the true Light, which lighteth every man that cometh into the world.
10 He was in the world, and the world was made by him, and the world knew him not.
11 He came unto his own, and his own received him not.
12 But as many as received him, to them gave he power to become the sons of God, even to them that believe on his name:
13 Which were born, not of blood, nor of the will of the flesh, nor of the will of man, but of God.
14 And the Word was made flesh, and dwelt among us, (and we beheld his glory, the glory as of the only begotten of the Father,) full of grace and truth.

​The Adverse Effects of Darwinian Ideology
​on Society and Humanity

If a person does nothing else their entire life, he/she should read the entire Bible (most accurate word for word translation available) from beginning to end, with an open and prayerful spirit: and, ask God (Yahuah) for knowledge, understanding, and wisdom in His Word as well as His Spirit to live His Word. 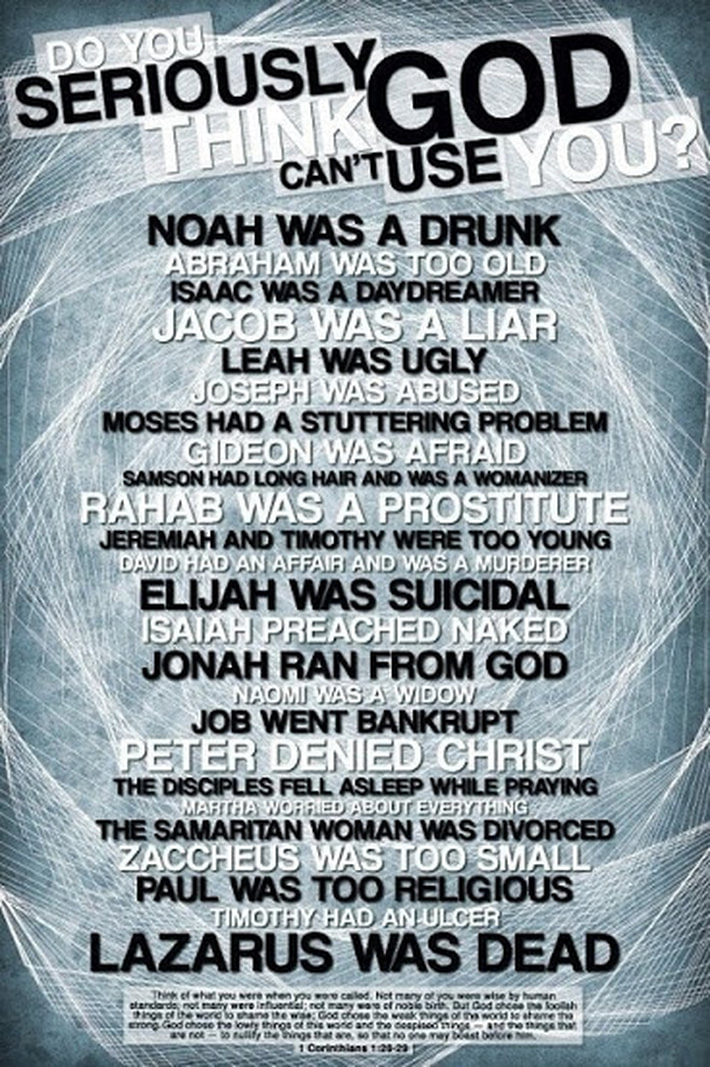 ​Click here and read the Bible Online - Most all versions

9 After this manner therefore pray ye: Our Father which art in heaven, Hallowed be thy name.
10 Thy kingdom come. Thy will be done in earth, as it is in heaven.
11 Give us this day our daily bread.
12 And forgive us our debts, as we forgive our debtors.
13 And lead us not into temptation, but deliver us from evil: For thine is the kingdom, and the power, and the glory, forever. Amen.
​ 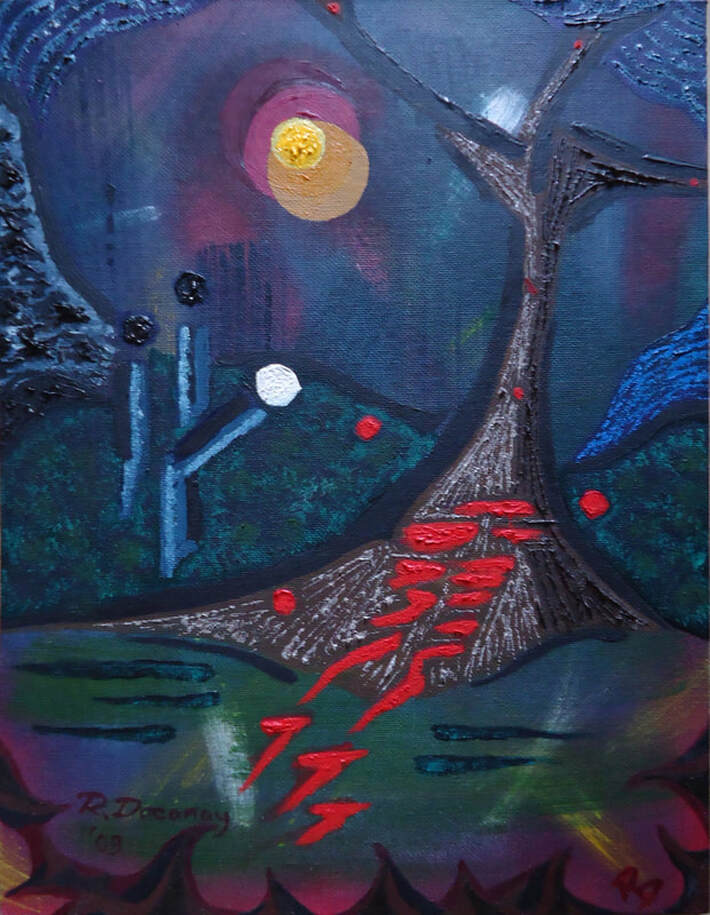