We have all sinned.

Romans 3:23
For all have sinned, and come short of the glory of God;
​ 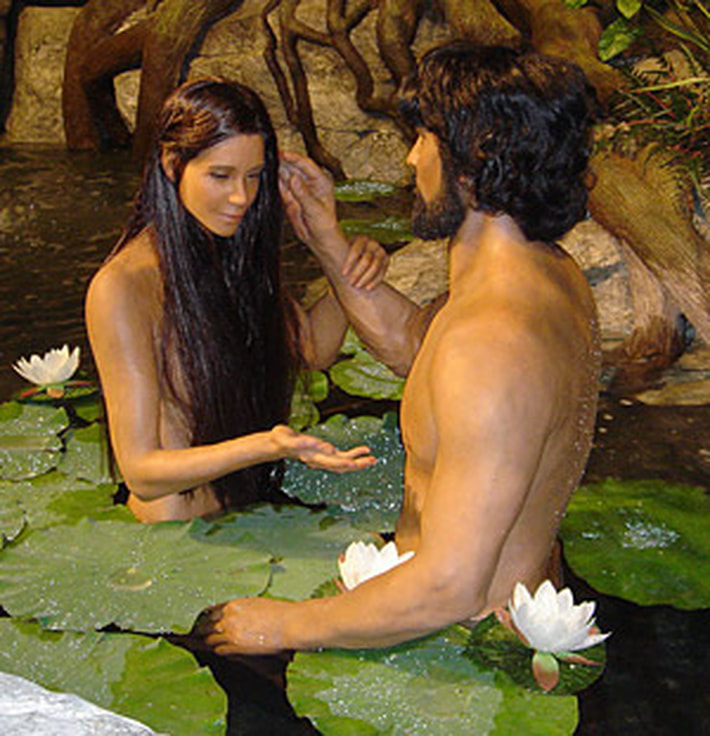 ​God made the heavens and the earth. God created man and woman on earth and gave them commandment on how to live. God never wanted mankind to die. From the beginning, man was suppose to live forever in paradise with God. By listening to the lies of the Devil, woman and man sinned against God’s commandment and brought upon themselves the curse of death which has been passed down to all men and women from generation to generation. Because the man and woman were naked God had to sacrifice the lives of animals to make coats of skins to cover their nakedness. So because of sin, blood had to be shed to cover mankind’s nakedness.

Genesis 3:21
Unto Adam also and to his wife did the LORD God make coats of skins, and clothed them.

In the same way, in the Old Testament, God commanded that his people offer sacrifices to atone for their sins. But these sacrifices could not take away sins.

Hebrews 9:22
And almost all things are by the law purged with blood; and without shedding of blood is no remission.

Hebrews 10:4
For it is not possible that the blood of bulls and of goats should take away sins.

Hebrews 10:11
And every priest standeth daily ministering and offering oftentimes the same sacrifices, which can never take away sins:
​ 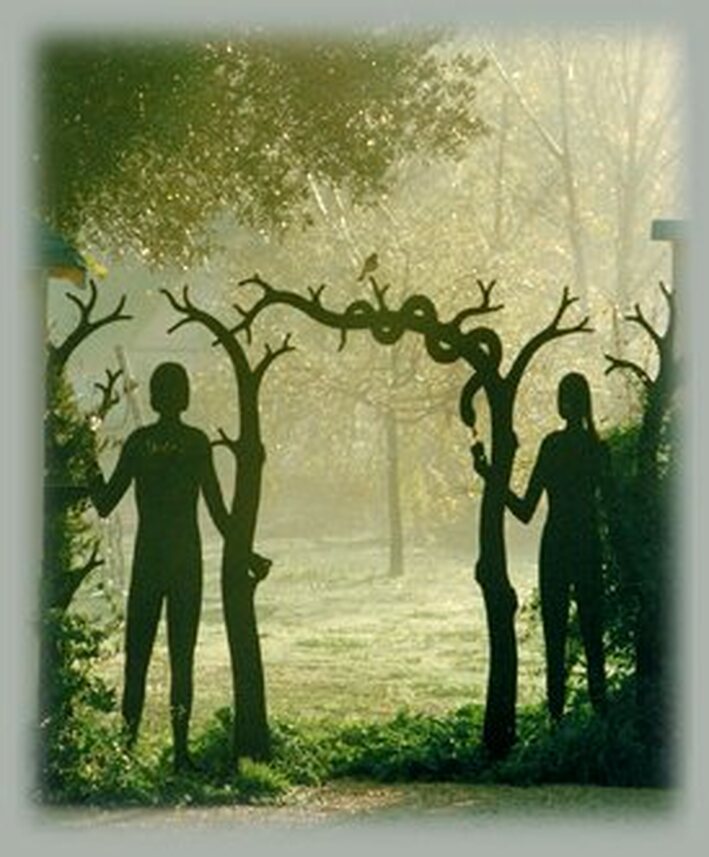 ​Again, let's consider where sin and death originated. In the beginning God created man and woman, Adam and Eve. Adam and Eve were suppose to live for ever with God in the paradise of the Garden of Eden. God gave them life and all provisions. God gave them his commandment…

“And the LORD God commanded the man, saying, Of every tree of the garden thou mayest freely eat: But of the tree of the knowledge of good and evil, thou shalt not eat of it: for in the day that thou eatest thereof thou shalt surely die.” (Genesis 2:16-17)

Through an evil and deceitful power of suggestion, the Serpent (or Devil) deceived Eve into believing a lie and sinning against God. The Devil suggested to Eve that she wouldn’t die if she were to eat of the wrong fruit. Eve listened to the Devil’s suggestion and sinned against God. Eve inadvertently persuaded Adam to sin against God’s commandment also. (What does the Devil suggest to people today? The devil will use people to suggest lies.) Only they that are led by the Spirit of God, God’s Word, are the sons and daughters of God. As a result of their disobedience to God’s commandment, God cursed the Serpent. God also cursed Adam and Eve…

“Now the serpent was more subtil than any beast of the field which the LORD God had made. And he said unto the woman, Yea, hath God said, Ye shall not eat of every tree of the garden? And the woman said unto the serpent, We may eat of the fruit of the trees of the garden: But of the fruit of the tree which is in the midst of the garden, God hath said, Ye shall not eat of it, neither shall ye touch it, lest ye die. And the serpent said unto the woman, Ye shall not surely die: For God doth know that in the day ye eat thereof, then your eyes shall be opened, and ye shall be as gods, knowing good and evil. And when the woman saw that the tree was good for food, and that it was pleasant to the eyes, and a tree to be desired to make one wise, she took of the fruit thereof, and did eat, and gave also unto her husband with her; and he did eat…

And the LORD God said unto the serpent, Because thou hast done this, thou art cursed above all cattle, and above every beast of the field; upon thy belly shalt thou go, and dust shalt thou eat all the days of thy life: And I will put enmity between thee and the woman, and between thy seed and her seed; it shall bruise thy head, and thou shalt bruise his heel. Unto the woman he said, I will greatly multiply thy sorrow and thy conception; in sorrow thou shalt bring forth children; and thy desire shall be to thy husband, and he shall rule over thee. And unto Adam he said, Because thou hast hearkened unto the voice of thy wife, and hast eaten of the tree, of which I commanded thee, saying, Thou shalt not eat of it: cursed is the ground for thy sake; in sorrow shalt thou eat of it all the days of thy life; Thorns also and thistles shall it bring forth to thee; and thou shalt eat the herb of the field; In the sweat of thy face shalt thou eat bread, till thou return unto the ground; for out of it wast thou taken: for dust thou art, and unto dust shalt thou return.” (Genesis 3:1-6,14-19)

Adam and Eve were also cast out of paradise (the Garden of Eden) and were prevented from eating of the tree of Life because of their sin against God.

Genesis 3:24
So he drove out the man; and he placed at the east of the garden of Eden Cherubims, and a flaming sword which turned every way, to keep the way of the tree of life.
​ 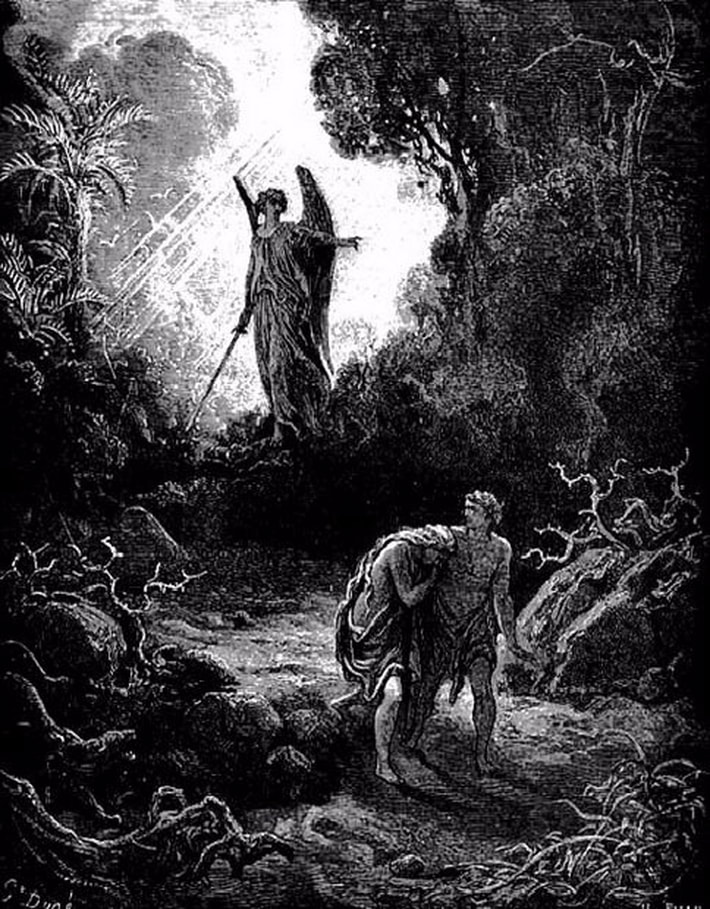 ​Because they were deceived by the Devil, from that day until now, death has been passed down from generation to generation to everyone because of sin.

Romans 5:12
Wherefore, as by one man sin entered into the world, and death by sin; and so death passed upon all men, for that all have sinned:

​Matthew 4
1Then was Jesus led up of the Spirit into the wilderness to be tempted of the devil.
2And when he had fasted forty days and forty nights, he was afterward an hungred.
3And when the tempter came to him, he said, If thou be the Son of God, command that these stones be made bread.
4But he answered and said, It is written, Man shall not live by bread alone, but by every word that proceedeth out of the mouth of God.
5Then the devil taketh him up into the holy city, and setteth him on a pinnacle of the temple,
6And saith unto him, If thou be the Son of God, cast thyself down: for it is written, He shall give his angels charge concerning thee: and in their hands they shall bear thee up, lest at any time thou dash thy foot against a stone.
7Jesus said unto him, It is written again, Thou shalt not tempt the Lord thy God.
8Again, the devil taketh him up into an exceeding highmountain, and sheweth him all the kingdoms of the world, and the glory of them;
9And saith unto him, All these things will I give thee, if thou wilt fall down and worship me.
10Then saith Jesus unto him, Get thee hence, Satan: for it is written, Thou shalt worship the Lord thy God, and him only shalt thou serve.
11Then the devil leaveth him, and, behold, angels came and ministered unto him.

Revelation 19
11And I saw heaven opened, and behold a white horse; and he that sat upon him was called Faithful and True, and in righteousness he doth judge and make war.
12His eyes were as a flame of fire, and on his head were many crowns; and he had a name written, that no man knew, but he himself.
13And he was clothed with a vesture dipped in blood: and his name is called The Word of God.

John 1
1In the beginning was the Word, and the Word was with God, and the Word was God.
2The same was in the beginning with God.
3All things were made by him; and without him was not any thing made that was made.
4In him was life; and the life was the light of men.
5And the light shineth in darkness; and the darkness comprehended it not.
6There was a man sent from God, whose name was John.
7The same came for a witness, to bear witness of the Light, that all men through him might believe.
8He was not that Light, but was sent to bear witness of that Light.
9That was the true Light, which lighteth every man that cometh into the world.
10He was in the world, and the world was made by him, and the world knew him not.
11He came unto his own, and his own received him not.
12But as many as received him, to them gave he power to become the sons of God, even to them that believe on his name:
13Which were born, not of blood, nor of the will of the flesh, nor of the will of man, but of God.
14And the Word was made flesh, and dwelt among us, (and we beheld his glory, the glory as of the only begotten of the Father,) full of grace and truth. 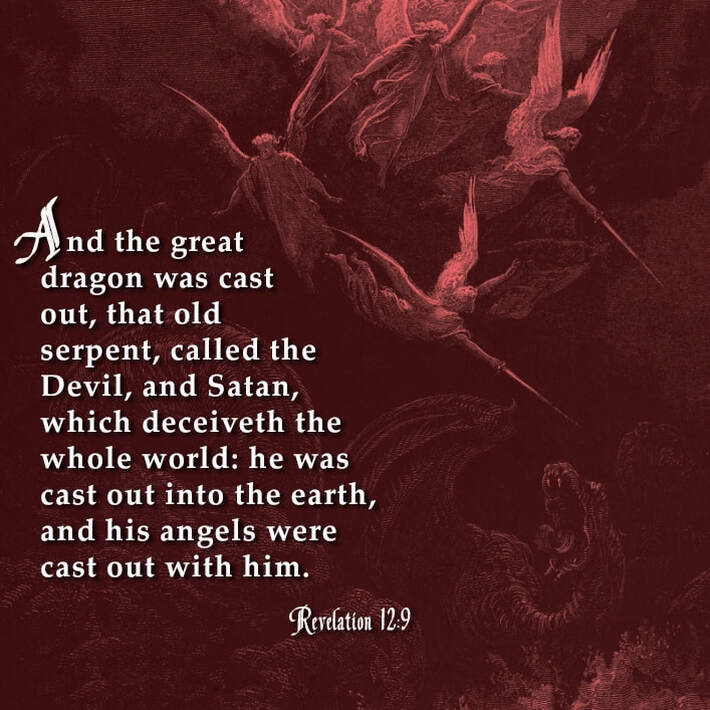